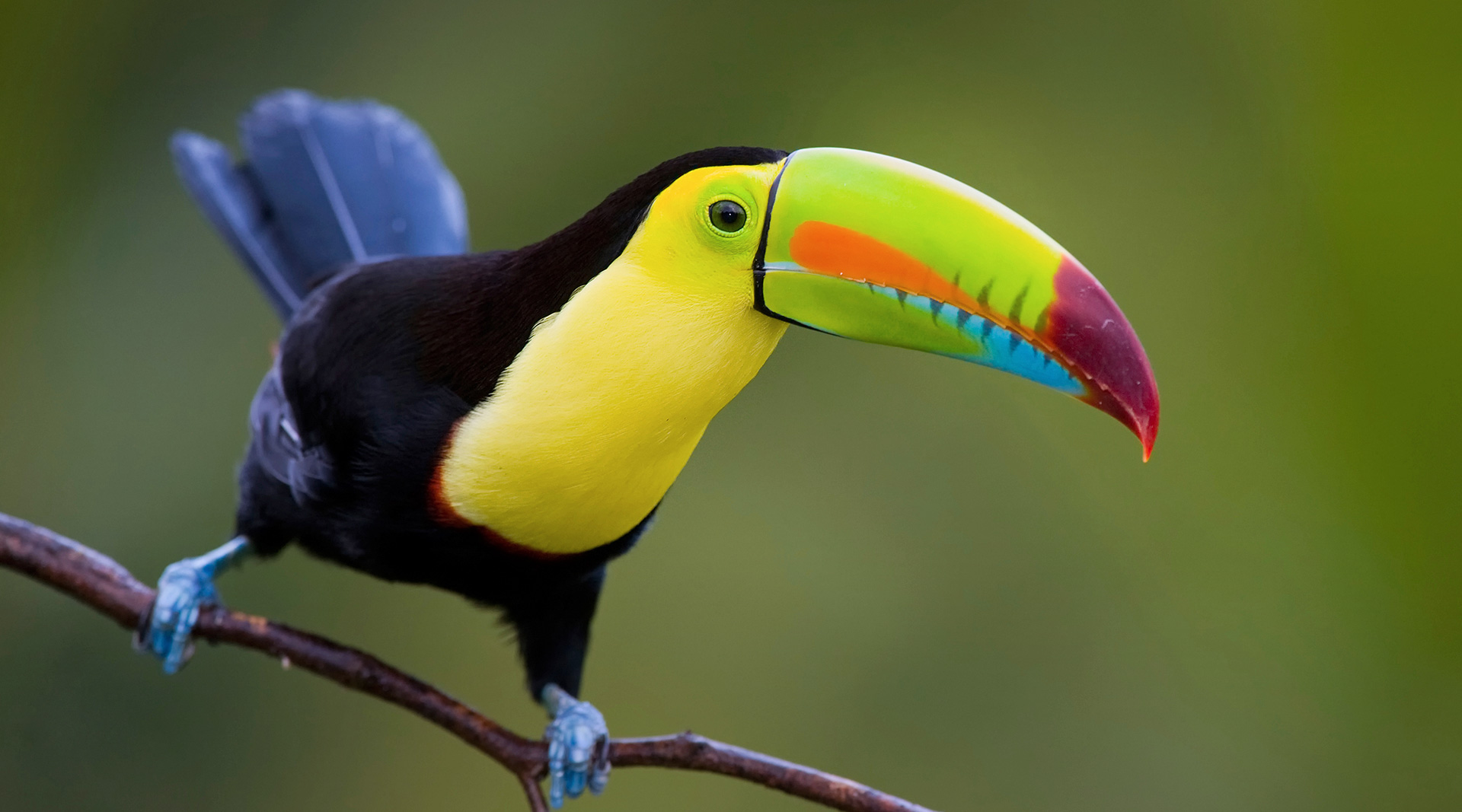 Day 1: San Jose, Costa Rica
Our Costa Rica adventure tour begins on arrival in San Jose, where you’re met at the airport and transferred to our luxury hacienda-style hotel. This evening, gather for a welcome dinner with our Expedition Leader.

Day 2: Tortuguero National Park—Private Boat Cruise
A chartered flight takes us directly to Tortuguero, one of the best places to view wildlife in Costa Rica. We’re quickly immersed in tropical wilderness as we travel by boat through the canals to our ecolodge. Tortuguero is famous for its endangered green sea turtles, which nest here from July to October, and we learn about them on a visit to the Sea Turtle Conservancy. We take a walk through Tortuguero village to renowned Miss Junnie’s restaurant for a typical Caribbean lunch.
At Casa Cecropia, a local center devoted to cultural and environmental education, a local expert talks to us about the ecology of the lowland flooded rainforest and waterways of Tortuguero, and how local flora and fauna have adapted. We also hear about the history of Tortuguero village, from its indigenous origins, colonization and Afro-Caribbean heritage, to the establishment of the national park and the impact of conservation and tourism on the local people today. Later this afternoon, a private boat cruise reveals plentiful wildlife as we navigate the maze of canals that lace the dense rainforest. We may see spider, howle,r and white-faced capuchin monkeys, tree sloths, caimans, and a spectrum of colorful birds.

Day 3: Tortuguero—Private Boat Cruise and Rainforest Walk
A dawn birding excursion is an option for early risers. Tortuguero is home to hundreds of different bird species including the endangered green macaw, Amazon kingfisher, toucan, egrets, and herons. After breakfast, take a morning boat cruise through the canals. Here in the tropics, steady sunlight, constant rain, and warm temperatures create an intense incubator for a profusion of species. Traveling by boat allows us to cover a large swath of Tortuguero's rainforest, revealing fascinating microhabitats and varied wildlife not easily viewed on land. Later, we explore a network of private trails on foot in search of more tropical wildlife, before one more private boat cruise. Ocean and freshwater meet in this network of lagoons, canals and beaches, creating an environment rich in biodiversity that's endlessly fascinating to explore.

Day 4: Osa Peninsula—Corcovado National Park
Our destination today is the remote Osa Peninsula at the southern end of Costa Rica's Pacific coast. Just getting there is an adventure, as we fly direct via chartered plane to the peninsula and board 4x4 vehicles to reach the village of Agujitas on Drake Bay. Here, we board a boat and make a wet landing on the beach, then ride tractors up the hill to reach our accommodation for the next two nights, a luxury ecolodge on the edge of Corcovado National Park, the crown jewel of Costa Rica’s national park system. Casa Corcovado, surrounded by a 170-acre private reserve, offers convenient access to Corcovado National Park, which National Geographic has described as the “most biologically intense place on Earth.” Here among Costa Rica’s largest trees, we find Central America’s densest populations of scarlet macaws, tapir and the highly elusive jaguar. After lunch, walk the Sendero Azul, a short private trail on the lodge reserve. Woody vines, towering trees and walking palms line the way as we search for sloths, monkeys, agoutis, coatis and intriguing birdlife, including Baird’s trogon, spectacled owl, and black-cheeked ant tanager.

Day 5: Exploring Corcovado National Park
Discover more of Corcovado's treasures on two nature walks today. As our long journey to reach this place attests, the Osa Peninsula is a wild and remote locale. It supports one of the world's largest remaining lowland rainforests and is considered Costa Rica’s last wilderness frontier. Corcovado National Park, which covers 100,000 acres and one-third of the peninsula, includes at least 13 different ecosystems and protects a multitude of endemic wildlife and plant species. This biological diversity stronghold contains half of Costa Rica’s animal species, including scarlet macaws, toucans, parrots, all four monkey species found throughout the country, and jaguars, although these shy cats are rarely seen. On guided walks, look for the many fascinating creatures that reside in Corcovado's ancient forests.

Day 6: Corcovado/San Jose/Monteverde Cloud Forest
Return to Drake Bay airstrip via boat and 4x4 for our short chartered flight back to San Jose. Leaving the city behind, wind up twisting roads from coastal lowlands into the cool heights of Monteverde, which means “green mountain." Moisture here doesn’t typically come from rain, but rather from the constant mists that swath the mountaintops, creating the cloud forest environment. Straddling the spine of Costa Rica’s continental divide, Monteverde Cloud Forest Reserve supports 2.5 percent of worldwide biodiversity, including 100 mammal species and 161 different amphibians and reptiles. Many of these are indicator species, which means they are sensitive to environmental changes and can alert us when an ecosystem is threatened. Some of these unique creatures are found only in the high mountains of Costa Rica and neighboring Panama.
Our secluded ecolodge offers the ideal base for exploring, surrounded by lush gardens, dense forest and the melodious calls of birds in the canopy—more than 400 species flourish here. This evening, we have a presentation on the three-wattled bellbird. Just four populations of this Central American endemic remain, one of which is found in this area. This private talk by an expert biologist will cover conservation, restoration and reforestation of the Pacific slope habitats of this bird known for its distinctive chiming call. Other highland endemics include the umbrella bird, emerald toucanets, and the resplendent quetzal, the iridescent bird sacred to the indigenous people of these remote mountains.

Day 7: Monteverde—Curi-Cancha Reserve/Canopy Skywalk
Monteverde is the most studied montane cloud forest environment in the world, and one of the world's most threatened ecosystems. Nurtured by perpetual mists, it harbors an estimated 2,500 species of plants, including giant strangler figs, a profusion of epiphytes that drape the forest from canopy to floor, and 300 different kinds of orchid. As we explore the forest, look for wild relatives of many familiar houseplants, such as philodendrons, bromeliads, ficus, and ferns, and spot colorful butterflies flitting among the leaves.
This morning, we take a walk through the Curi-Cancha Reserve, a private sanctuary frequented by a great variety of birds, including the resplendent quetzal and bellbird. Curi-Cancha is 50 percent virgin forest, with most of the remainder restored to native forest from pastureland in recent decades. Mammal sightings may include agouti, coati, armadillo, kinkajou, ocelot, sloth, olingo, porcupine, and three species of monkey: mantled howler, white-faced capuchin, and spider monkey. Later, we view the intricate web of life on display via the Skywalk, a 1.5-mile network of elevated walkways that lift us into the canopy. About 90 percent of all organisms in the cloud forest live in the treetops, which the sun strikes to produce abundant food. More adventurous travelers can choose an optional zip line tour through the canopy.

Day 8: Lake Arenal Private Cruise/Rainforest Night Walk
Leaving Monteverde early this morning, we drive around the vast expanse of Lake Arenal, enjoying stunning views en route. A private boat cruise on the lake offers an expansive vista of Arenal Volcano. After lunch in the lively town of La Fortuna, continue to Arenal Observatory Lodge, set high on a ridge facing the famous volcano, surrounded by thousands of acres of tropical rainforest. Seismologists from the Smithsonian Institution and the National University of Costa Rica closely monitor the volcano from the research station at the lodge. Until 2010, minor eruptions had been constant, with the symmetrical cone spewing magma and smoke on an almost daily basis. Since then, however, the 5,437-foot volcano has been in a dormant phase, though still simmering inside. A new volcano visitors center contains extensive photos and data on the history of the volcano.
Built in 1987 originally as a scientific research station for the Smithsonian, the lodge is the only accommodation inside Arenal National Park, with more than 15 miles of private trails lacing the rainforest foothills that surround it. More than 400 bird species are on the premises, one of the most extensive lists in the American tropics. Flowers and fruiting trees in the garden in front of the lodge attract constant bird activity, with more 30 species of hummingbird on display. Mammals are abundant, too, and we could spot spider monkeys, howler monkeys, coatis, brocket deer, anteaters, and peccaries on nature walks. Infrequently seen but also present are wild cats, such as pumas, jaguars, and oncillas. After dinner at the lodge, a guided night walk with our Expedition Leader reveals nocturnal wildlife, including the famous frog pond with its noisy chorus of croaks and clicks.

Day 9: Arenal Hanging Bridges/Hot Springs
Explore the biodiversity of the rainforest this morning on the network of trails radiating from the lodge. After lunch, take a guided walk over the Arenal Hanging Bridges, a series of suspension bridges overlooking a dense canopy of primary rainforest with views of Arenal Volcano and Lake Arenal. One the most striking ecotourism projects in Costa Rica, the bridges range from 16 to 330 feet long and form part of a 2-mile trail that loops through the rainforest. Along the way, view lush vegetation, colorful flowers, and both resident and migratory tropical birds, including a multitude of hummingbirds. Look up in search of sloths high in the branches. Where there is volcanic activity, there is usually geothermal activity, and in the late afternoon we have a chance to soak in a nearby hot springs before returning to the lodge for a farewell dinner.

Day 10: Bird Walk/San Jose/Depart
After an optional early morning bird walk and a final breakfast in the shadow of the volcano, return by road to San Jose to connect with homeward flights. Please schedule flight departures no earlier than 2 p.m. today.