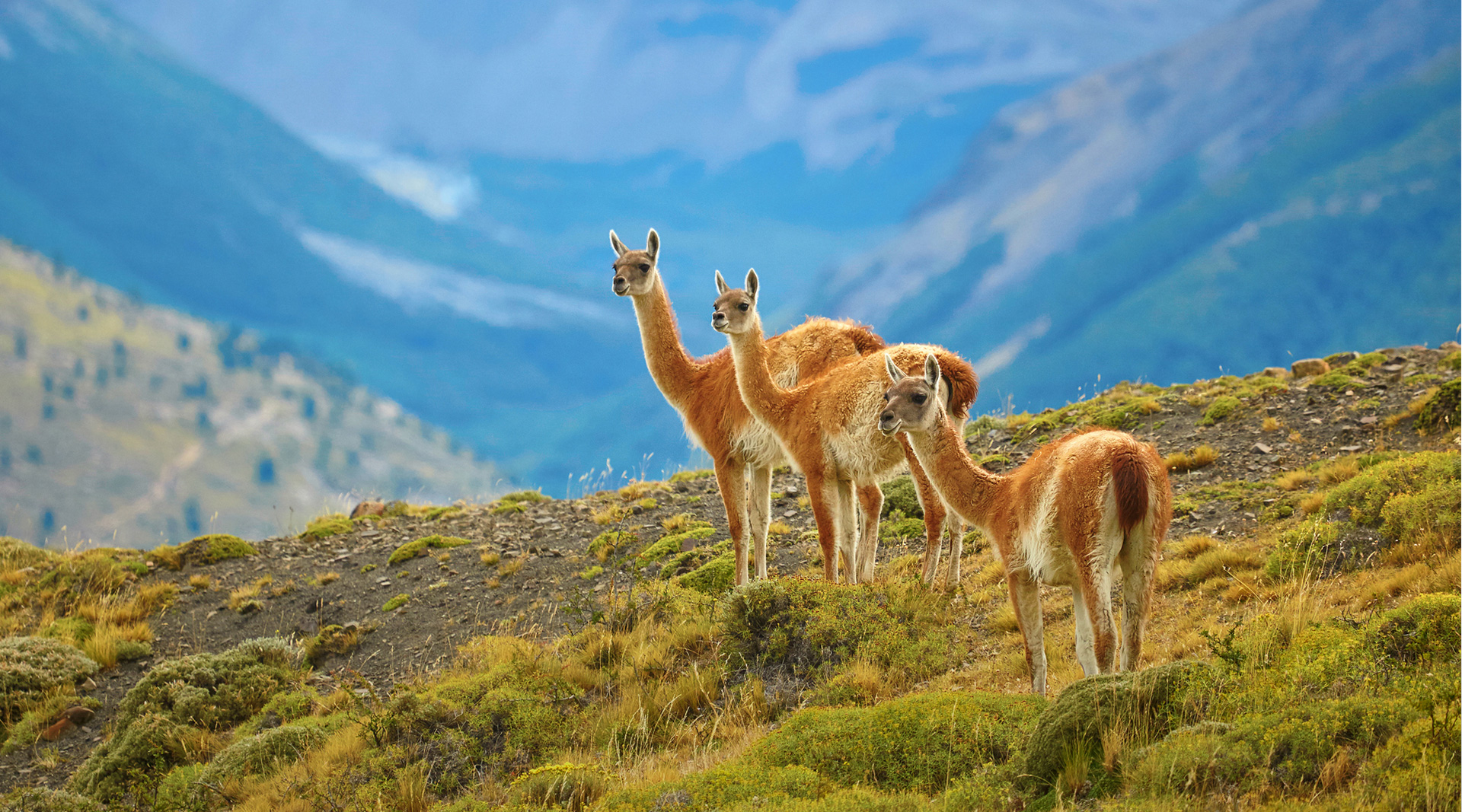 Our Patagonia adventure begins on arrival in El Calafate, where we meet our expedition leader and traveling companions at a welcome dinner. On the edge of the Southern Patagonia Ice Field, El Calafate was originally a hub for wool traders in the early 20th century. It became an important tourism base when Los Glaciares National Park was created in 1937, and remains so today.

Discover one of Patagonia's premier highlights with a private boat cruise on Lago Argentino in Los Glaciares National Park. We disembark for a short hike along a secluded shoreline to arrive at a viewpoint overlooking the face of Perito Moreno Glacier. Among the most famous of the more than 50 outlet glaciers spilling from the 6,500-square-mile Southern Patagonia Ice Field, Perito Moreno is one of very few advancing glaciers on the planet. Almost 200 feet high, it winds down from the perpetual snowfields of the Andes to its terminus in the vast lake, calving icebergs into the turquoise water. Back aboard the boat, get closer to the glacier’s imposing blue face, which spans more than three miles across. Ashore, it's just a short distance to the official entrance for sightseeing at Perito Moreno, with boardwalks in the area offering varied vantage points on the glacier and ice-littered lake.

Driving across pampas and steppe, we enter Chile to reach Torres del Paine National Park. A UNESCO Biosphere Reserve, the park is home to a host of wildlife including pumas, guanacos, foxes, huemul (South Andean deer) and armadillo. An impressive array of birdlife is resident here, too: look for eagles, hawks, rheas, buzzards and South American condors back from the brink of extinction. Dominating the horizon are the famous Torres del Paine—“Towers of Paine"—igneous rock spires millions of years old.

A highlight is a stay at renowned EcoCamp Patagonia. Domed suites are modeled on traditional Kawesqa huts, blending artfully with the natural landscape. Warm and wind-resistant, these nomad-style dwellings offer outstanding views and a total immersion in nature. There are plenty of hours ahead to absorb the beauty of this stunning landscape: at the height of the southern summer, the sun doesn't set till around 11 pm. In its golden rays, watch fuzzy guanacos grazing on the steppe, with a backdrop of a row of mountain spires straight out of a fairy tale. As the sun finally dips below the horizon, the peaks are bathed in rosy alpenglow—an evocative finale to the day.

Spend three full days exploring Torres del Paine National Park, with a flexible schedule to accommodate weather whims. Observe the Paine massif from varied angles, with roaming guanacos, Andean condors, and native flora in the foreground. Classic Magellanic subarctic forest species are on display here—lenga, ñire and coihue, a tall evergreen that can reach 140 feet. If we’re lucky, we may spy the Magellanic woodpecker and the huemel, a rare Chilean deer that is a national symbol found on the coat of arms on Chile's flag.

Our expedition leader plans each day’s itinerary based on weather conditions and visibility. Among our options, we may hike to a vista of Los Cuernos, a famous outcrop of dark granite horn-like spires. Brilliant blue Lake Pehoe reflects the serrated peaks like a mirror, and we follow its shoreline to Salto Grande Falls, which thunders down from Lake Nordenskjold above. In the northern part of the park, the view from Laguna Azul offers a wholly different angle on the famous Torres del Paine. We may also stop at Cascada del Rio Paine to admire this series of beautiful terraced waterfalls. In the park, we search for pumas along the sendero de la fauna—the animals' trail—so dubbed for the many guanacos that frequent the route. It winds through a favorite puma hunting area where we may see remains of camelids that the tawny cats have preyed upon. "Puma" is the name the Incas gave to this agile predator, which is also known as a cougar or mountain lion. High rock formations flank the path, providing dwellings and lookouts for these stealthy felines. While pumas are notoriously elusive, we have seen them regularly in recent seasons. We'll hope to further that luck on a walk through known puma territory, as our expedition leader teaches us to scout for signs of their presence.

We drive south this morning with views of Lago el Toro, en route to reach Puerto Natales on Ultima Esperanza Sound, where black-necked swans and gulls bob in the sapphire sea. The Sound, whose name means "last hope," was so dubbed in 1557 by the mariner Juan Ladrilleros, who was seeking the Strait of Magellan. The body of water represented his final hope to find the strait after exploring the intricate maze of channels between the Pacific Ocean and the mainland. It was not until 1830 that another major expedition sailed through the fjords of Ultima Esperanza: the first British expedition of the sloop HMS Beagle. The town of Puerto Natales enjoys a scenic setting with a backdrop of the Paine Massif, Riesco Mountains and glaciers of the Southern Patagonia Ice Field. From here, we fly one hour by private chartered plane to Porvenir, skipping a lengthy drive and ferry crossing of the Strait of Magellan. Porvenir is the main town of Tierra del Fuego, an archipelago off the southernmost tip of the South American mainland.

Keeping an eye out for roving guanacos, we drive from Porvenir along the west coast of Tierra del Fuego to reach King Penguin Park, a private conservation reserve on Inutil Bay. From elevated boardwalks and strategic hides, we spend unhurried time at this remote site, observing the endlessly entertaining antics of the world’s second-largest penguin species. Established when birds arrived to nest here in 2010, it is the most northerly king penguin colony in the world, and the only place to see this species outside of Antarctica and the Falkland Islands. Standing about 3 feet tall and weighing 30 pounds or more, king penguins sport classic black and white markings with splashes of vibrant orange across their head, beak, and chest.

After a box lunch, we head back to Porvenir, admiring a dramatic view of the strait and Baquedano range en route. A short hike to the Swan Lagoon offers a chance to see land and sea birds, including black-necked swans, white-necked swans, flamingos, caiquen, and various duck species. But the real highlight is a fascinating geological phenomenon protruding from the shallow water: ancient stromatolites. Found in only a few places on the planet, these layered mounds of sedimentary rock were originally formed by the accretion of cyanobacteria and, at more than 3 billion years old, they are the earliest fossil evidence of life on Earth. Late this afternoon, we board a private chartered flight back to Punta Arenas.

Wake before sunrise for a full day of whale watching and marine life encounters on Bahia Carrera. A private transfer delivers us to our embarkation point south of Punta Arenas. Heading into the Strait of Magellan, watch the sun rise near Fort Bulnes, the first Chilean establishment in the region. As we pass Froward Cape, the southernmost point on the mainland of the Americas, look for sea lions and elephant seals lounging on the rocks. Cruising among islands covered in lenga and coihue forest, we admire the large hanging glaciers of the Darwin Range in the distance. Wildlife is abundant in Francisco Coloane Marine Park, and we may see humpback whales, Peale’s dolphins, Magellanic penguins, petrels, cormorants, skuas, and albatross at close range. Occasionally we encounter a group of orcas. At the end of an exhilarating day on the water, we transfer back to Punta Arenas where we gather for a farewell dinner.

A transfer to the airport is included this morning to meet departing flights.

Please Note: This itinerary is meant as a guideline and can change due to the unpredictable nature of the wind and weather in Patagonia. On some occasions, conditions may require us to deviate from our intended itinerary, in which case we will provide the best available alternative. And we'll make a great adventure of it!