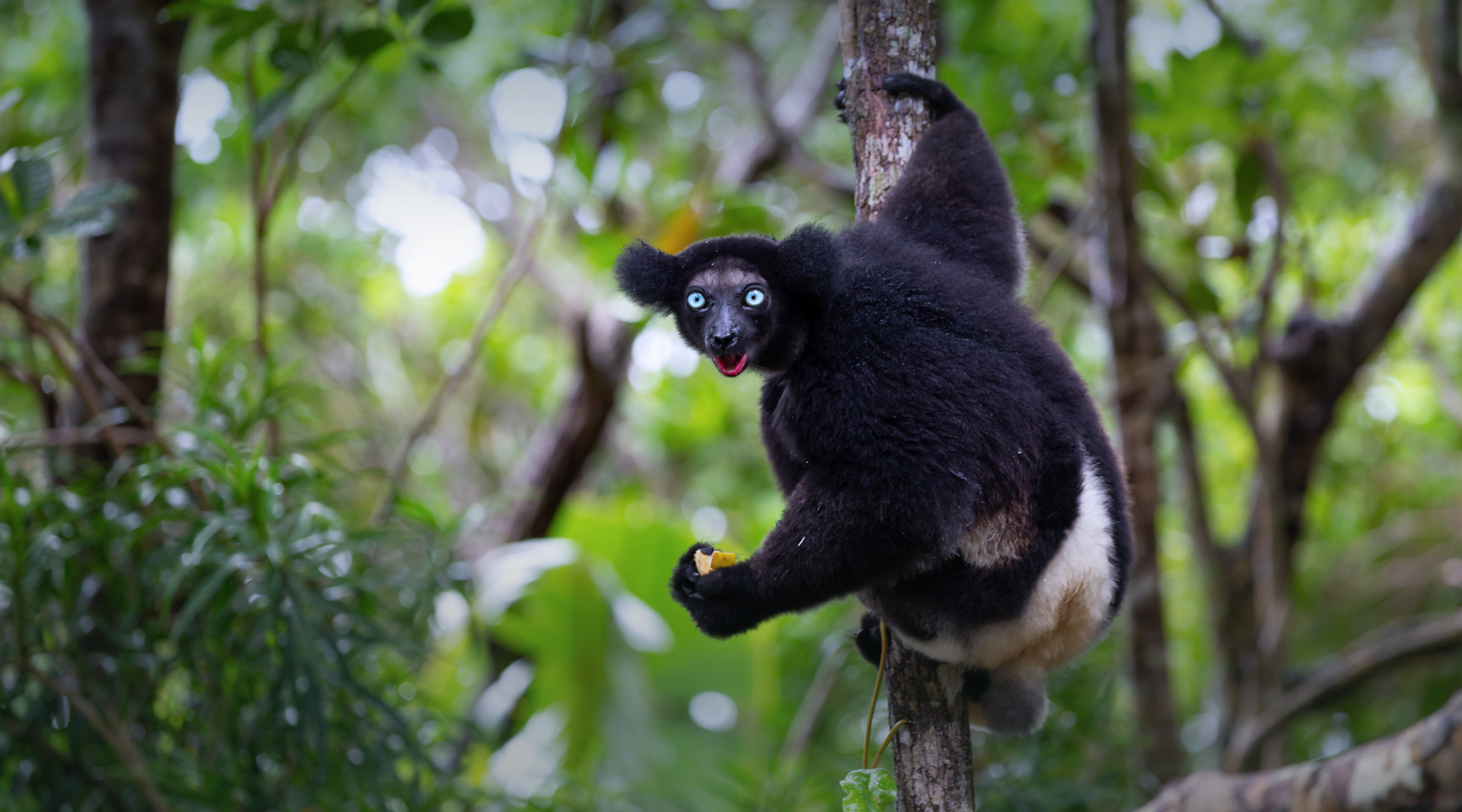 Day 1: Antananarivo, Madagascar
Our adventure begins in Antananarivo, the capital of Madagascar. Known locally as "Tana," Madagascar's largest city is home to roughly 3 million people, while the balance of the country's population lives mostly in rural areas. A transfer is included from the airport to our hotel, located in a peaceful setting on a small lake on the outskirts of the city. Gather this evening for a welcome dinner with our expedition leader.

Days 2–4: Antananarivo, Madagascar/Andasibe-Mantadia National Park
Leaving the city behind, we pass rice paddies and small villages to reach Andasibe-Mantadia National Park. Within this protected rainforest, we have our first opportunity to hike in search of lemurs, primates found only in Madagascar. The country is home to approximately 100 species and subspecies of lemur, and the world’s largest, the indri, is found in this park. As exciting to hear as it is to see, this pied creature has a distinctive call, its loud, eerie wailing ringing out through the trees. We may also spy gray bamboo, Eastern woolly and black-and-white ruffed lemurs, as well as diademed sifakas that spring through the canopy like athletic dancers. On night walks, look for tree frogs, chameleons, and palm-sized brown mouse lemurs that skitter among the strangler figs and giant ferns.
Madagascar’s premier national park is a critical component of the country’s efforts to conserve its biodiversity in the face of extensive deforestation. Besides lemurs, this threatened biome contains a thousand different orchid species that bloom during the rainy season, numerous medicinal plants, the iridescent green and turquoise Parson’s chameleon (one of the largest in the world—as long as your forearm), and a spiky insectivore called a tenrec, which looks like a striped hedgehog. This protected tract of rare montane rainforest is one of the world's top birding locales. We also visit Lemur Island, a small sanctuary where lemurs rescued from captivity are thriving. Three species, including the common brown lemur, bamboo lemur, and black-and-white ruffed lemur, have become habituated to visitors, allowing for close encounters and delightful photo opportunities.

Days 5 and 6: Ranomafana National Park
Return to Antananarivo by road and take a chartered flight to the hilltop town of Fianarantsoa, noted for its 19th-century colonial Old Town filled with colorful houses and winding streets. From here, we make a scenic drive to Ranomafana National Park, created in 1991 following the discovery of the endangered golden bamboo lemur. Today, the park is a hub of research and discovery that is vitally important for the conservation of regional wildlife. Comprised of steep, mountainous terrain, Ranomafana's 250 square miles encompass varied habitats at a range of altitudes, from lowland rainforest to cloud forest to high plateau forest. Cliffs draped in lush vegetation and waterfalls abound in this rugged wilderness, which we explore on guided hikes. With multiple guides, we are able to split the group according to physical ability, tailoring hikes accordingly.
The park is home to 12 species of lemur, including three different bamboo lemur species, 120 frog species, numerous chameleons and other reptiles, 90 butterfly species, and the fascinating but rarely seen fossa. Birds are abundant, too, with more than 100 species present, including ground-rollers, red-fronted coua, and collared nightjar. A night walk may reveal brown mouse lemurs and various amphibians active after dark. The lush rainforest also harbors many different carnivorous plants.

Days 7 and 8: Isalo National Park
Constantly changing views unfold on a full-day scenic drive to southern Madagascar. Get glimpses of local life as we pass through small villages into a landscape in stark contrast to the eastern rainforests. Stop en route at the Anja Community Reserve for a picnic lunch and a chance to see rambunctious ring-tailed lemurs feeding in the trees or foraging on the ground. Continuing south, we enter a region of mountainous plateaus and eroded canyons reminiscent of the American Southwest, as massive rock outcrops rise from dry grass plains. Reaching the striking Isalo massif, witness fascinating flora that thrives against this Jurassic-era sandstone backdrop, including the odd-looking swollen pachypodia, or “elephant’s foot,” with its bright yellow flowers.

Several varieties of lemur live among the cacuses, aloes, and palms, especially the ring-tailed lemur we look for on a hike in Isalo National Park. The 200,000-acre park is also home to more than 80 bird species and 33 reptile species. It is the sacred homeland of the tribal Bara people, whose burial sites are marked by mounds of tiny stones placed in crevices in the rock faces. Amid the arid landscape, we come upon a swift stream running through an ancient deep gorge. There's an option to climb a series of steep steps to a natural pool fed by a thundering waterfall that has carved its course into the sandstone. Later, as the sunset fades, look up at the ebony sky for some of the best stargazing on the planet.

Day 9: Zombitse-Vohibasia National Park/Isalo
Drive west to Zombitse-Vohibasia National Park today, a little-visited reserve on the border of two biological zones—dry deciduous tropical forest and more humid forest and savanna. The park is an island of green in the middle of a widely deforested region, and as such, it provides crucial natural habitat for an array of flora and fauna. Some of Madagascar’s finest bird watching is here, with a number of endemic species, including the very rare Appert's tetraka that is native to this forest alone. We also look for the giant coua, the iridescent souimanga sunbird, greater and lesser vasa parrots, Oustalet’s chameleons, and, always, lemurs. Among the park's eight lemur species, we may see Verreaux's sifaka, red-fronted brown lemurs, and the Hubbard's sportive lemur, a prize sighting found only in this park, if we're lucky. We feel especially fortunate to be here, knowing that our presence is directly responsible for protecting this rare habitat from destruction. Late this afternoon, we return to our secluded ecolodge in Isalo to spend one more night.

Days 10–12: Anjajavy Private Reserve
A truly exclusive journey awaits today, as we board a chartered flight north to the 17,000-acre private nature reserve of Anjajavy. This vast protected area on the Indian Ocean is reached only by chartered small aircraft, with access via the reserve's private airport. The lodge fronting the cerulean waters of the Mozambique Channel is our base for exploring the dry deciduous forest of northwest Madagascar. This remote area, less disturbed than other regions of the country, harbors a striking number of endemic species. Look for the common brown lemur and Coquerel’s sifaka during guided forest hikes, though we frequently see the latter on the lodge grounds as well. Night strolls may reveal gray and golden brown mouse lemurs, giant hairy crabs, and various reptiles. The forest contains some 1,800 plant species, among them richly colored rosewood trees and massive baobab trees shaped like squat bottles. Our four-star resort, Madagascar's only member of the exclusive Relais & Chateaux group, accommodates guests in deluxe thatched bungalows overlooking a private white sand beach.

Private boat excursions offer a close-up view of this secluded region that's mostly uninhabited except for a couple of nearby fishing villages. While we may pass a few fishermen in their dhows with triangular white sails or paddling wooden pirogues, we're largely alone along this wild coastline. It's a scenic landscape of rocky outcrops and tiny indented coves, with unspoiled beaches dotted by pale ghost crabs. Travel by boat to Moramba Bay to view eroded limestone formations protruding from the sea, and huge baobab trees that stand sentinel over densely vegetated environs. Search the coastline for the Madagascar fish eagle, rare Madagascar sacred ibis, and crested ibis. A sunset cruise through the mangroves reveals more birds, and, if we’re lucky, Madagascar flying foxes leaving their roosts at dusk. From the lodge, you may also opt to explore the coastline by kayak, snorkel over a coral reef from the beach, and explore a subterranean cave where we may spy bats. On the lodge grounds, the "Oasis" provides a garden sanctuary for a wide variety of aquatic and climbing plants, papyrus, tree ferns, and palm trees that offer refuge to green kingfishers, red fodies, and active sifaka lemurs. A saltwater infinity pool overlooking the ocean provides welcome refreshment after a day of discovery.

Day 13: Antananarivo/Depart
After a leisurely breakfast at the lodge, we fly by chartered aircraft back to Antananarivo for connecting flights homeward.